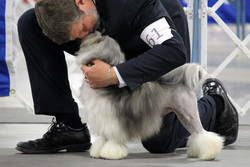 Greg was born and raised in upstate New York just outside of Syracuse. In his youth he helped exhibit his family’s Lhasa Apsos and Afghan Hounds in both Junior Showmanship and regular conformation. His personal pet and best friend was a Chow Chow named Alzado (named after his favorite football player Lyle Alzado). Alzado became the football mascot for Cazenovia High School where Greg played. Later, Greg (along with Alzado) found himself in southern California apprenticing under the country’s top terrier handlers, Clay and Bergit Coady. Arriving back home on the east coast Greg started his own career as a Professional Show Dog Handler. He moved to Maryland in the mid 80’s and purchased a facility in Easton. From there he operates a very successful Boarding, Grooming and Training center know as Top of the Bay Pet Lodge. Acting also as a base of operation for his show dogs, Top of the Bay allows Greg to travel the country participating in all AKC shows. His client base for these exceptional dogs includes local owner’s right there in Maryland, owners from many other states within our country and even abroad in Australia, Japan and other countries. Greg and his lineup of dogs can be frequently seen on TV shows such as Westminster Kennel Club, The National Dog Show, The AKC/Eukanuba Invitational, Animal Planet and many others. His experience with all breeds is marked by having trained and shown Best in Show winners from all 7 groups defined by the AKC. Greg has earned championships on 1,000’s of different dogs in almost every breed including his Mom’s Lowchen. In the years ranging from 2007 to 2012, Greg piloted Carol’s Lowchen to number 1 status 5 out of those 6 years. Bihar Lowchens hold the honor of having one of three Lowchen to ever win an All-Breed Best in Show. Greg takes great pride in working with Peggy and the other members of the Bihar Lowchen Family (Gillian and Danielle) in order to continue with what his Mom worked so passionately towards; the refinement of a great breed, a wonderful companion, and a beauty to watch in the show ring.